VICTORIA has sent a statement to Australian Secondary School Rugby League (ASSRL) organisers — we’re ready to compete against the powerhouses of Queensland, New South Wales and the Australian Capital Territory in the Junior National Championships. 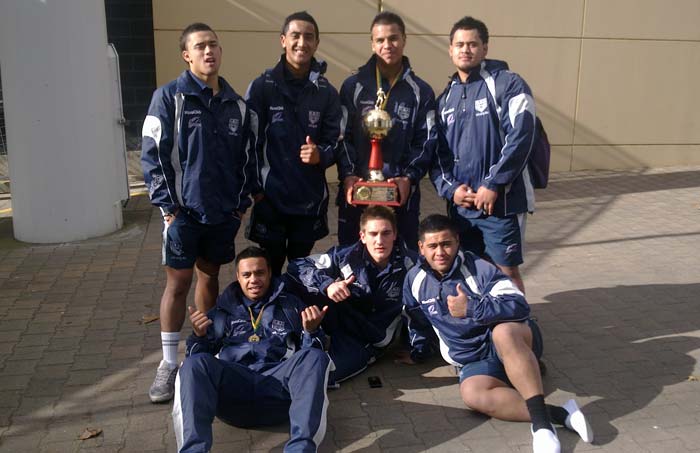 “We just came to play I guess and just wanted to show everyone that we were capable of playing in Pool A,” Player of the Tournament Pride Petterson-Robati says.

“We were expecting to go well because Victoria has sort of dominated Pool B in the past and I reckon we should move up and play Australia’s best next year because we’ve got the team to do it.”

The boys in navy blue dominated the carnival from the outset with a crushing 86-0 win against South Australia, before inflicting a 46-4 defeat upon WA and fi nishing with a 52-0 thumping of the Northern Territory.

Patterson-Robati was instrumental throughout the tournament but was at his best against WA when he crossed the try line on four occasions.

“I thought I played well but I definitely didn’t expect to be named Player of the Tournament, but was stoked that I was,” the humble teen says.

The Hallam Senior College Year 11 student is a rising star on the junior rugby scene and has continued to fl ourish after being plucked from New Zealand to join the prestigious Melbourne Storm Academy.

The Storm coaches including Craig Bellamy came across and attended a scholarship camp where they picked players to join the Academy.

“I wasn’t actually expecting to get picked because I was about three years younger than everyone trying out but I was over the moon to be chosen.”

And while admitting it was a difficult decision to leave home, the powerfully built youngster says he was eager to start playing against Australia’s best juniors.

“They (Melbourne Storm) said it was up to me when I wanted to move over and when I felt old enough and ready.

It was tough to leave but it was what I really wanted, because I wanted to start playing footy over here as soon as possible.”

Patterson-Robati was one of six Hallam students to turn out for Victoria at the Championships and along with another 11 Victorians has been chosen to represent the Combined Affiliated States (CAS) team in the ASSRL Pool A Championships to be held this month in Sydney.

“As long as we (CAS) work together as well as we (Victoria) did in the Affiliated States tournament then we should do all right.”

This article was sourced from Spress: www.spress.com.au
Categories
Go to Top