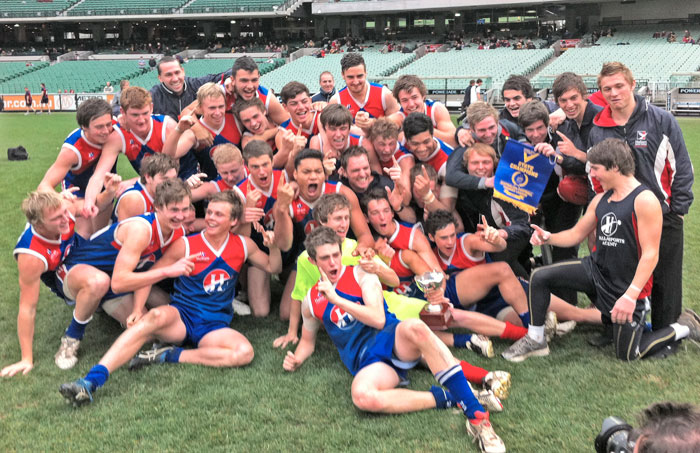 The grand final on Sunday 24th July, a curtain-raiser to the Hawthorn-Melbourne AFL match, was an even affair until the fourth quarter when Hallam ran over the top of Essendon-Keilor.

Hallam found the goals early in the first quarter, with Jackson McDonald snagging an around-the-body shot after crumbing at the feet of tall forward and under-16 Stingrays representative Agape Patolo.

A response was found shortly after by Essendon-Keilor’s Mitchell Day, who struck two in the first quarter and looked threatening when near the ball for the entire match. Goals to Hallam’s Luke Cody and Matt Adair saw the margin narrowly favour Hallam by nine points at the quarter break.

The second quarter account was opened for Hallam with Patolo getting a free kick and converting the shot, before sealing his second from a good lead and conversion. Bella Zijai had the ball on a string as he duck and wove his way around numerous Essendon-Keilor opponents through the midfield and wings.

Hard run from the Johnston twins, Damien and Dan, provided great drive to the Hallam forwards, Matt Rennie and Stewart Scanlon, with both forwards striking for Hallam just before the half-time break to set the margin at 23 points.

The third quarter saw Hallam up its intensity, with tackling pressure from captain Piva Wright and Adair allowing for better gains on the scoreboard via McDonald, Daniel Jackson, before Essendon-Keilor replied with three consecutive goals to squeeze the match down to an 11 point deficit.

Hallam weren’t going to be upstaged in the colloquial “premiership quarter” however, they counter-attacked through a huge Piva Wright tackle and his kick forward found Jackson who soccered through his second. Hallam generated some amazing link-up football from the half-back line soon after, as Scanlon found Nathan Wright, who got the ball out to his namesake Piva Wright before hitting up Matt Rennie on the lead. Rennie’s shot after the siren flew true to leave the game in the balance at 23 points.

Any initiative Essendon-Keilor generated in the third quarter vanished as Hallam ran away with the match in the final term. The goalkickers in the fourth looked like a best-on-ground sheet for Hallam, as Piva Wright and ruckman Jake Calvert joined the goalkicking party, with Cody, Scanlon and Jackson adding a second goal each to see Hallam take the match by 50 points.

Awarded best on field was Ryan Morrison, who worked tirelessly to initiate much of Hallam’s rebound football from the backline. Piva Wright, Nathan Wright and Calvert were also strong workers for Hallam, as well as the midfield trio Bella Zijai, Dan Johnston and Scanlon.