Inspire Your Kids to Read Forum 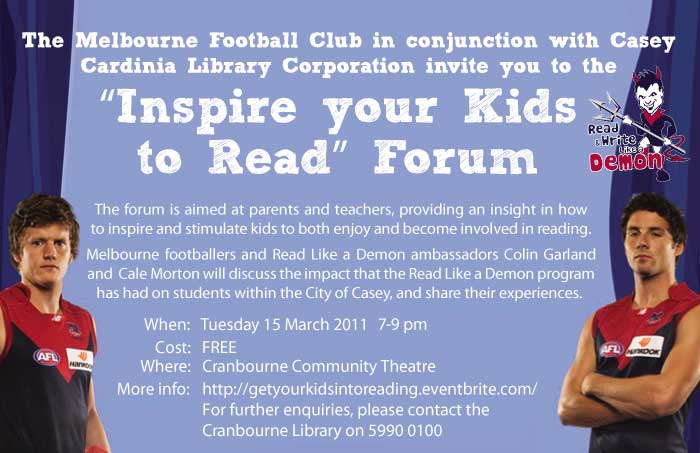 The forum is aimed at parents and teachers, providing an insight in how to inspire and stimulate kids to both enjoy and become involved in reading.

Authors Michael Wagner, one of Australia’s most original and successful writers for children and Archie Fusillo, a popular and most sought after speaker in schools and literary forums, will provide tips on how to encourage and motivate children and teens to read.

Melbourne footballers and Read Like a Demon ambassadors Colin Garland and Cale Morton will discuss the impact that the Read Like a Demon program has had on students within the City of Casey, and share their experiences.

Michael Wagner
Michael Wagner is one of Australia’s most original and successful writers for children. In the past few years, Michael has written 35+ children’s books, but is best known for his Maxx Rumble Footy and Cricket series the acclaimed novel Dog Wars, and his hilarious and warm-hearted six-book series about a hyper-sporty (and competitive) father and son known as The Undys.

Archie Fusillo
Archie has worked as a teacher and as features writer for two international magazines. Many of his short stories have been published in Australia’s leading magazines and journals. His first teenage novel, Sparring With Shadows, was a Notable Children's Book Council of Australia book and went on to be shortlisted for the Italy in the World Literature Awards. He followed this up with The Dons and later Bruises, among others. He also writes for the Aussie Bites children's series.