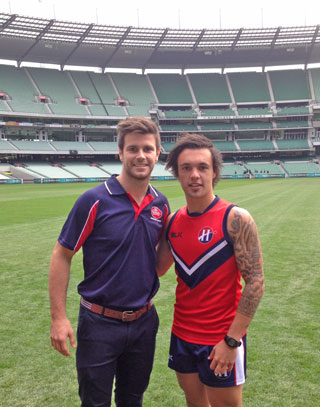 The launch of the Herald Sun Shield was held on Wednesday 4th June at the MCG.

Captain of the Hallam Senior College team, Troy Toussiant and coach Manny Peresso, joined more than 70 people, including the Executive Officers of the four School Sports Associations, principals, teachers and school football captains, for the launch the 38th edition of the famed competition.

Cotchin was joined by Aasta O’Connor, one of the most highly credentialed female players in Australia, and AFL Talent Manger Kevin Sheehan to share their football journeys and thoughts on the current state of Australian football.

Cotchin spoke with pride about his time at Penleigh Essendon Grammar and memories of playing with his school mates in the Herald Sun Shield.

While O’Connor might not enjoy the same profile as the Tigers’ best and fairest, her football achievements speak for themselves.

The key position player is a five-time All Australian, four-time premiership player for Logan Cobras (Queensland), a premiership player with Darebin Falcons, a Best and Fairest winner in the VWFL, and the title of Western Bulldogs captain in the inaugural 2013 Women’s Exhibition Match.

Hallam's next game is the semi-final of Premier League on the 18th June at Victoria Park against Bendigo SSC.