HALLAM Senior College has won its way into the School Sports Victoria Premier League grand final to be held at the Melbourne Cricket Ground on 24 July. 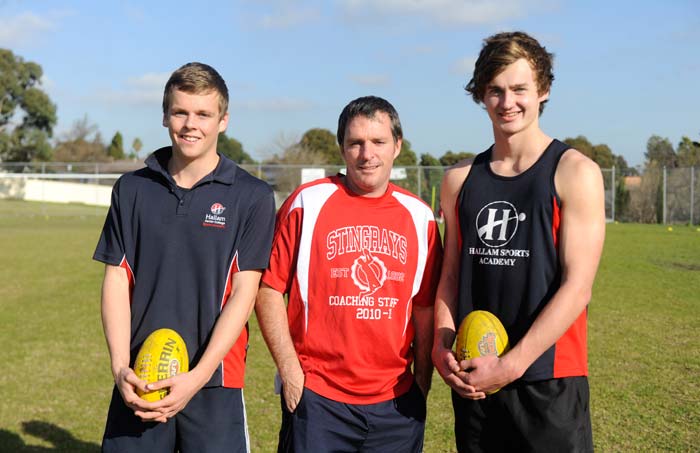 Hallam won its way through to the grand final by beating Wodonga Secondary College, Sale Catholic and Box Hill Senior Secondary College in the group stage, before beating Bendigo Catholic in the semi-final held at the Coburg Football Ground on 22 June.

No strangers to facing each other in high-stakes matches, the 2011 Premier League grand final will be a repeat of 2010 Victorian Secondary School Sports Association (VSSSA) grand final, in which Essendon-Keilor beat Hallam.

Hallam SC Sports Academy coach Ben McGee said the high work ethic the team adheres to is in part responsible for their success to date.

“The team has built itself around five values: tackling, blocking, courage, respect and concentration,” McGee said.

“They’ve been important for everyone, especially our top players who need to embody these traits to lead by example.”

The task of running a top-quality underage football team within a school environment has its difficulties, but McGee believes the players benefit greatly from the program.

“We run rehabilitation within the program every Monday morning, with our boys meeting at the swimming pool do a rehab session.

“It’s about preparing them as best as possible for their growth and to meet the high standards we set out for ourselves in this program.”

The players in this program are high-calibre, some of which could feature prominently in this year’s AFL draft.

“Piva Wright is our captain and a very important player for us,” McGee said.

“He’s had limited availability with Stingrays/Vic Country, but it was wonderful to have him play in the semi-final against Bendigo Catholic and he stood out.”

“Nathan Wright has also had a fantastic year with the Dandenong Stingrays and has been able to recover from some knee soreness and was a fairly critical player for us in the semi-final.”

McGee also highlighted the contributions of Bella Zijai, Stewart Scanlan, Jackson McDonald and Matthew Rennie in getting Hallam to the grand final.

Barring injury or fitness concerns over their TAC Cup players, Hallam will field a full-strength team when it runs out onto the MCG.

“All of our TAC Cup kids, after consulting with Mark Wheeler at the Stingrays, will be available for the match,” McGee said. “We should get access to all our kids playing in the TAC Cup, as long as they’re not injured.”

If Hallam wins the Premier League grand final, they will face a team from the Associated Grammar Schools of Victoria (AGS), in a semi-final for a chance to play the All Schools grand final later this year.