The sporting achievements of students, teachers, schools and volunteers were celebrated at the 21st annual Victorian School Sports Awards ceremony held on 10 March at the MCG.

Ben Halfpenny won his Sporting Blue for his wonderful achievements in Rugby League in 2014. During 2014 Ben represented Melbourne Storm in both the SG Ball 18’s team and Holden Cup 20’s team.

In addition to this, at schoolboy level, Ben captained his school team to a state title on AAMI Park, captained the Victorian schoolboys team to victory at the Combined Affiliated States Championships in Adelaide. Ben was then selected in and captained the (CAS team) Combined Affiliated States Australian team at the Australian Secondary Schools Rugby League (ASSRL) 18 years Championships in Darwin. The CAS team performed well above expectation and a large part of this can be attributed to Ben’s leadership and hard work ethic.

He won the Victorian Rugby League representative player of the year for 2014. Ben is now contracted to the Melbourne Storm Holden Cup 20’s team for 2015. 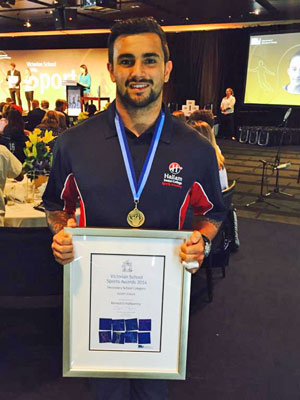 Karly Tapner-Gillies won her award for her achievements Female Australian Rules Football in 2014.

Karly had an outstanding 2014. She was selected as a member of the State U18 Australian Rules girls team and formed part of their leadership group. Karly was selected in the All Australian team at the end of the National carnival.

She was captain of the Hallam Senior College Australian Rules girls team that won the School Sport Victoria senior girls title and she won the best & fairest award.

Karly also was a member of her local youth girls team that won the grand final. She finished 3rd in their best & fairest and 4th in the Sth East Juniors league vote count.

These achievements are a great testament to Karly’s commitment to hard work and excel as she suffered a major knee injury midway through the year due to being hit by a car. She missed several weeks of football while recovering yet still managed to find a way to participate for her school and local football teams in the finals. 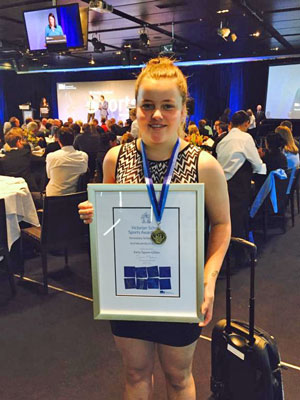 The school has a unique range of programs that service the local community in a number of ways.

The school is proud of the contribution it makes to the local community through implementing modified sports clinics and coaching at local primary schools and junior high schools. These programs are conducted by senior students and supported by staff from the college and have been refined over the past five years.

The Hallam Senior College Sports Academy offers specialised programs in Aussie Rules Football, Basketball, Rugby League, Soccer, Softball and in 2016 will see the start of our netball Academy with will further develop our involvement in the local community.

A list of all Award winners may be found at: