To reach the 2010 final we had to successfully advance through the seven knockout rounds that featured 350 schools. After an early stumble that nearly saw us knocked out to Mentone in the third round, the Hallam girls began to assert their dominance with a 56-0 win over last year’s premiers that earned them a place in the final. 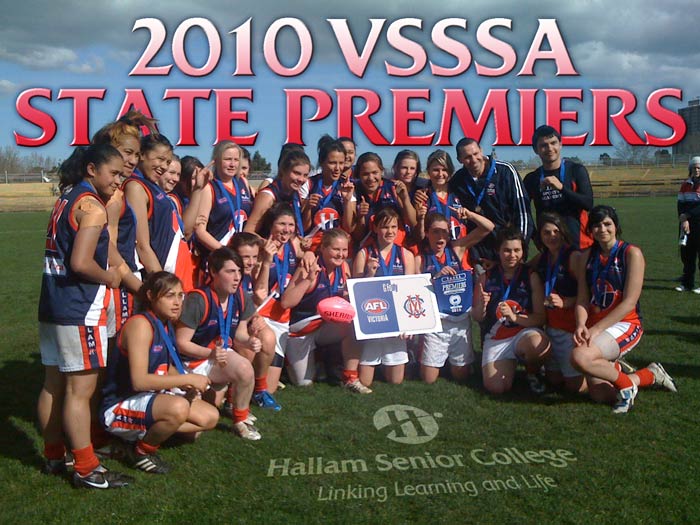 Southern Zone Grand Final.
On Wednesday 4th August the girls AFL team played Frankston High School in the Sth Zone Grand Final at Hallam Reserve. The girls jumped out of the blocks and had all the play having 10 scoring shots in the first quarter but only kicking 4 goals. The second & third quarters saw the girls pour on the pressure both in general play & the scoreboard, holding a 70 point lead at ¾ time. The final score was 97-13. The way the team played was exceptional with all the girls having the opportunity to play in different positions.

State Semi Final
On Thursday 12th August the girls footy team won the state semi final. They were sensational, defeating box hill 46 to 14 & Wonthaggi 57 to 0. They have really developed as a team this term, putting all the training over the year into devastating effect on game day.

We raced out to a six goal lead by half time and at the final siren we had Northcote by 56-points to claim the championship. Mikaela Greer finished best on ground for her work in the ruck while the Blackburn sisters and on-ballers Madison and Ellie also finished in the best.

It has been an amazing journey with them this year and they clearly showed they are the best team in the state. The officials at the game said it was the most skilful game of girls football they have ever seen. We had great support from parents and thanks to the staff who attended. We also had ex students who have played girls footy here over the last 2 years there watching.

Thanks to all the staff that have allowed the girls to leave/miss classes over the year. I appreciate your support. It is great to get feedback from the girls saying that yesterday will be their favourite memory of school.