Hallam student Ellie Blackburn has taken out the top award at the Victorian Government’s 2011 Community Sport and Recreation Awards. 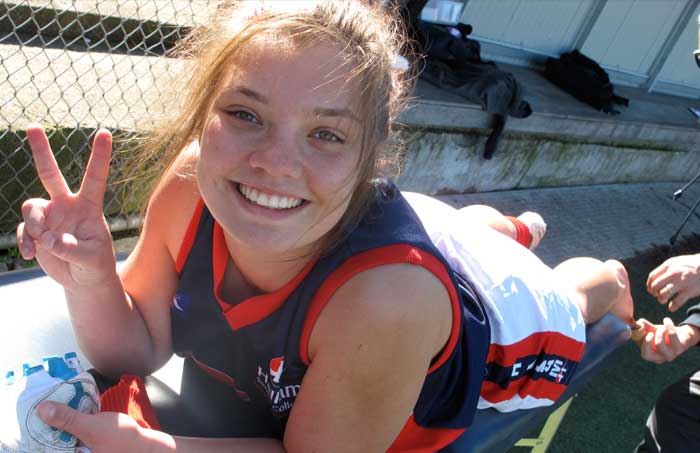 Minister for Sport and Recreation Hugh Delahunty announced Ellie as the winner of the 2011 Minister’s Award for Sportsperson of the Year at an awards ceremony held at the MCG.

“This is yet another accomplishment for Ellie, who at such a young age, already has a long list of accolades under her belt,” Mr Delahunty said.

“She’s a talented athlete, a member of AFL Victoria’s Youth Girls Academy and also a budding cricketer. Ellie is a terrific role model for her peers and an inspiration for many young women seeking to get involved in traditionally male-oriented sports.

“That’s what these awards are about – celebrating the members of our community who break through barriers to participate, achieve and inspire.

“Tonight’s awards are a reminder there are sporting heroes in every region, at every club, right across Victoria,” Mr Delahunty said.

The Minister’s Award for Sportsperson of the Year recognises an act(s) of sportsmanship by an individual, team or club, with consideration for fairness and respect for teammates, officials and / or competitors. Recognises a sportsperson who embodies the true spirit of sport –‘Its not if you win or lose, but how you play the game’. This behaviour may be a single act of sportsmanship or a longer term contribution.

Ellie’s nomination was strengthened by her off field efforts. Whilst enjoying great on field success, she balanced this by being one of the first to volunteer for community progams. She has participated in community events for the City of Casey, under 12 junior girls SEJ come and try days, Auskick player appearances and has delivered clinics to girls and boys in local schools as part of her school Academy commitments. Minister for Sport, Hugh Delahunty, acknowledged the importance of achieving a balance in life and so her solid academic results also played a part in the decision to give Ellie the award.

The awards caps of a brilliant year for the Hallam Sports Academy member.

Some of Ellie’s 2011 achievements include:

As a footballer, Ellie works tremendously hard to prepare herself as an elite footballer. She has combined her study program with the Sports Academy, ensuring continued football and academic development. Ellie seeks critical feedback from her coaches and mentors, working hard to overcome her weaknesses.

She has now turned her attention to preparing for the upcoming season and Victoria’s defence of its title at the AFL’s Under 18 National Championships in May.

Everyone at Hallam Senior College congratulates Ellie for receiving one of the state’s highest sporting awards.