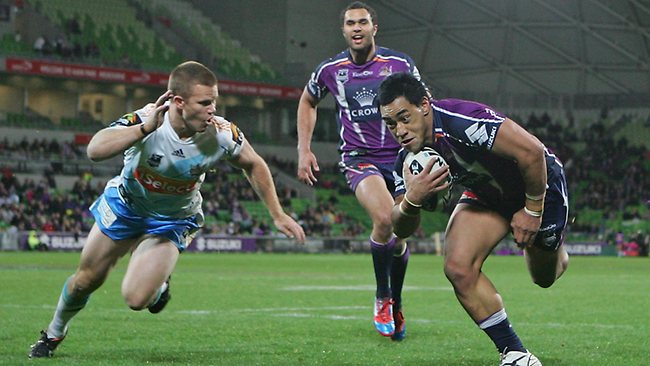 Mahe Fonua of the Storm runs with the ball during the round 23 NRL match between the Melbourne Storm and the Gold Coast Titans at AAMI Park on August 10, 2012 in Melbourne, Australia. Source: The Daily Telegraph

Of all Melbourne’s achievements since it was born in 1998, only premierships outstrip the debut of Mahe Fonua.

Mahe, a former student and member of the Hallam Senior College Rugby League Academy, became the first born and bred Victorian to play for the Melbourne Storm after a late call-up by coach Craig Bellamy in friday night’s 24-16 win over Gold Coast at AAMI Park.

Storm coach Craig Bellamy said Fonua’s presence had been a great moment for the club. ”It was a fantastic night for the club to have a Melbourne-born-and-bred rugby league player play first grade for the Storm,” said Bellamy, who admitted he misled media by denying that Fonua would play last night because the youngster told him he did not want the media pressure on him.

In the end, Fonua overcame a shaky first half where he ran hard but fumbled his first touch and the Titans exposed his inexperience in their first two tries. But he improved in the second half, in which he was denied two tries – the first because of a correct ruling that he had taken a forward pass and the second through desperate Titans defence.

He also took an impressive AFL-style hands-up take of a Titans bomb that would not have looked out of place on the MCG.

Inaugural coach Chris Anderson, who led the team to a premiership in 1999, the club’s second season, said Fonua’s selection would open the doors for more local players progressing through the Storm’s development programs.

”Once you get the first one, it opens the door for three or four others,” Anderson said. ”The first one is always the hardest, so if they keep doing the work, the kids are going to see now there is an opportunity for them to come through the grades and play rugby league.”

Congratulations Mahe from everyone at the Rugby League Academy and Hallam Senior College.