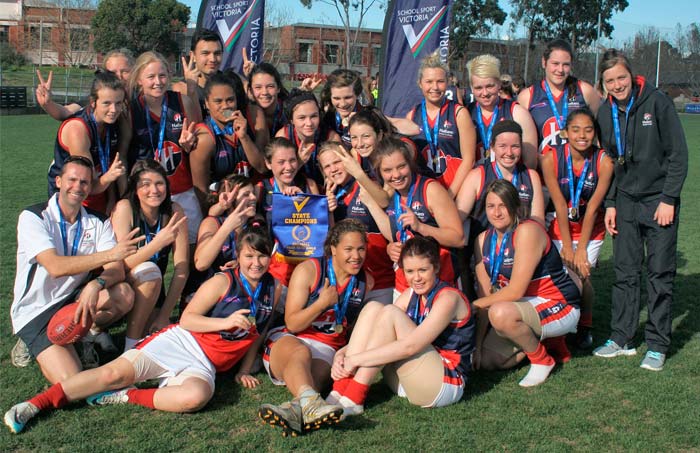 THE Hallam Football Academy has retained its title as the best girls side in the state.

The back-to-back state victories by the Hallam girls, accompanied with the 15.13 (103) to 8.5. (53) win by the boys over Essendon-Keilor on the MCG on 24 July, gives Hallam’s Football Academy a rare double.

“It was history in the making as we’re the first school to win the senior boys and the senior girls football in the same year,” Hallam coach Brett Alexander said.

The team beat Catholic College Bendigo, 9.9 (63) to 2.0 (12) in the grand final at Victoria Park, the old home of Collingwood Football Club.

The Hallam girls won their way into the big match after thrashing Maribyrnong Sports Academy 14.7 (93) to 1.0 (6) in the first game of the day, earning their spot in the grand final.

Bendigo took it up to Hallam in the first quarter but, as the match dragged on, Hallam gained the upper hand to run out comfortable winners to take back-to-back state titles. Hallam beat Northcote last year.

Ellie Blackburn, from Endeavour Hills, was judged best on ground in the grand final, with three goals and numerous possessions. Others in the best player list included Cherie Tamanaleuli, Kirsten Mcleod and Maddison Blackburn.

“Winning the state title is brilliant,”  Alexander said. “It was a bloody big day. The girls stood up really well and it was a great victory.”

“To play on Victoria Park, which is a really big ground, and then to contend with the hot weather meant the girls had to work hard. This year saw the introduction of some independent schools into the School Sport Victoria footy program which led to the competition getting stronger.”

“Our head of sport, Sean Goss, stated that the final against Bendigo was the hardest game he had seen in girls footy and described it as a showpiece of AFL girls footy.”

“I don’t know if we’ll beat them,” Alexander said. “They won the junior and senior championships last year. A few of the year 12 Hallam girls are staying back to focus on school commitments, so we’ll be taking a younger team up there, but it will still be a good challenge.”

Five Hallam girls – Chloe McMillan, Ellie Blackburn, Danielle Hardiman, Bianca Jakobsson and Riplee McLachlan – were named in the Victorian under-18 squad to play in the national championships on the Gold Coast from 18-24 September.