Back to Back in Two Sports

The girls of the Hallam Senior College Sports Academy accomplished a unique piece of history in school sport. 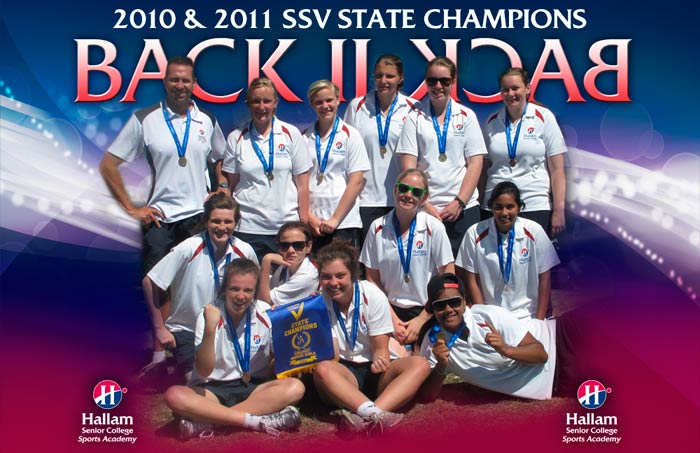 On Tuesday 18th October the Girls’ Cricket team played in the School Sports Victorian State Finals. All games were a twenty/20 format.

Our first game was the Semi Final against Bendigo Secondary School. Batting first, Bendigo amassed a score of 5 for 69 in their overs. Pick of the bowlers for us were Sharna Naidu & Rachel Hunt, who both got 2 for 7 off their 4 overs.

After losing a couple of early wickets cheaply against a very good bowling attack the girls steadied and passed the score in the 12th over  for the loss of only 3 wickets. Kiah Laughlin Glen lead the way with a very attacking 51no.

This win saw us play Bachus Marsh for the State Title.

They won their semi final on the back of a 130 run opening stand so it was crucial the girls took early wickets.

This they did, through two sensational bits of play. Our keeper Ellie Blackburn tapped the ball onto the stumps in mid air to effect a great run out. Then 1 over later Rachel Hunt took a superb catch after the ball was belted at her.

These 2 wickets set them on the back foot and the girls really went for the throat, taking another 7 wickets to see them collapse to 9 for 21.

During this collapse Sharna Naidu took the incredible figures of  5 for 4 off 3 overs, including a hat trick. Kirsten McLeod also picked up 2 for 3 off 2 over’s. The last wicket took until the 18th over to get and Bachus Marsh were dismissed for 37.

Chloe McMillan & Sharna Naidu opened the batting and guided us to a very comfortable victory, passing the score in the 8th over for the loss of no wickets.

This Victory saw the girls claim back to back State Titles and capped of a remarkable year for the majority of them, as all except two were also members of the back to back State Champion AFL Girls Teams. Over the last 2 years the both sides have been undefeated and have accomplished a unique piece of history in school sport.