The Great Wall Cup of Beijing is an international youth football tournament organized by Beijing Football Association in association with China Sports Tour. 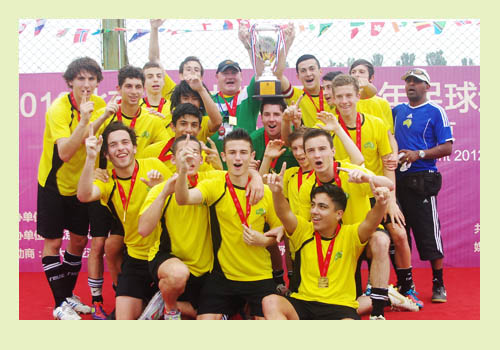 The final game of the 2012 Great Wall Cup was played on July 27 in which Footskills Dragons made a perfect comeback and won the championship with a 4-1 winning over Bowen Soccer Academy. Taking the early initiative, Bowen opened the scoring at the beginning of the match. However, Footskills managed to keep clear-heads and organized their attack. Not long after, they had successfully levelled the score at 1-1. Footskills started the second half better and with skillful technique, they scored two goals against Bowen’s defense. Finally, Footskills’ last power shot sealed the match victory and also the title of Champions of the 2012 Great Wall Cup U18 Category.

An awards ceremony was held after the competitions, both for the winning teams and for international referees in thanks for their attendance and refereeing in the Great Wall Cup.

Congratulations to Ian and the students for their achievement on the world stage.