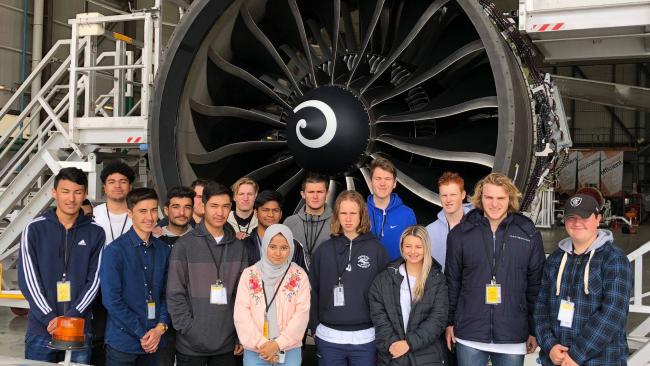 According to the International Air Transport Association, the number of passengers predicted to travel by air in 2036 is estimated to almost double to an amazing eight billion compared to current numbers. This illustrates the enormous growth occurring in the aviation and aerospace industry particularly in the Asia-Pacific region which will be the source of more than half the new passengers over the next two decades.

This is something that our young people at Hallam Senior College have already started to think about when considering their future career pathways. And what better way to kick-start these thinking processes than to have a truly hands-on Boeing 787 Dreamliner experience as well as with other fixed wing and rotary wing aircraft.

On Tuesday 23rd October, 2018, Physics students from Hallam Senior College were given an incredible privilege to go behind the scenes at the Jetstar Maintenance Facility (Melbourne Airport). There, they were able to link their classroom learning about Bernoulli and Newtonian lift, jet engines and aerofoil wind tunnel testing with actual aircraft structures and systems on real and very large aircraft. Later, at the Air Ambulance (Essendon Airport), students were able to learn about how rotary wing aircraft control flight by getting a very intimate look at the HEMS helicopters.

Hallam Senior College has a strong focus on aeronautics and aviation technology with a drone and aviation technology elective offered to students at Year 10 and extensive studies in aerospace for students who choose to undertake Physics as part of their VCE. Our school is extremely fortunate and privileged to have strong connections with a number of organisations that allow this field trip to occur annually. Very special thanks go to our friends at Aviation/Aerospace Australia, Jetstar and Air Ambulance Victoria who always go out of their way to warmly welcome and accommodate our students and make this a very special event for our students each year.