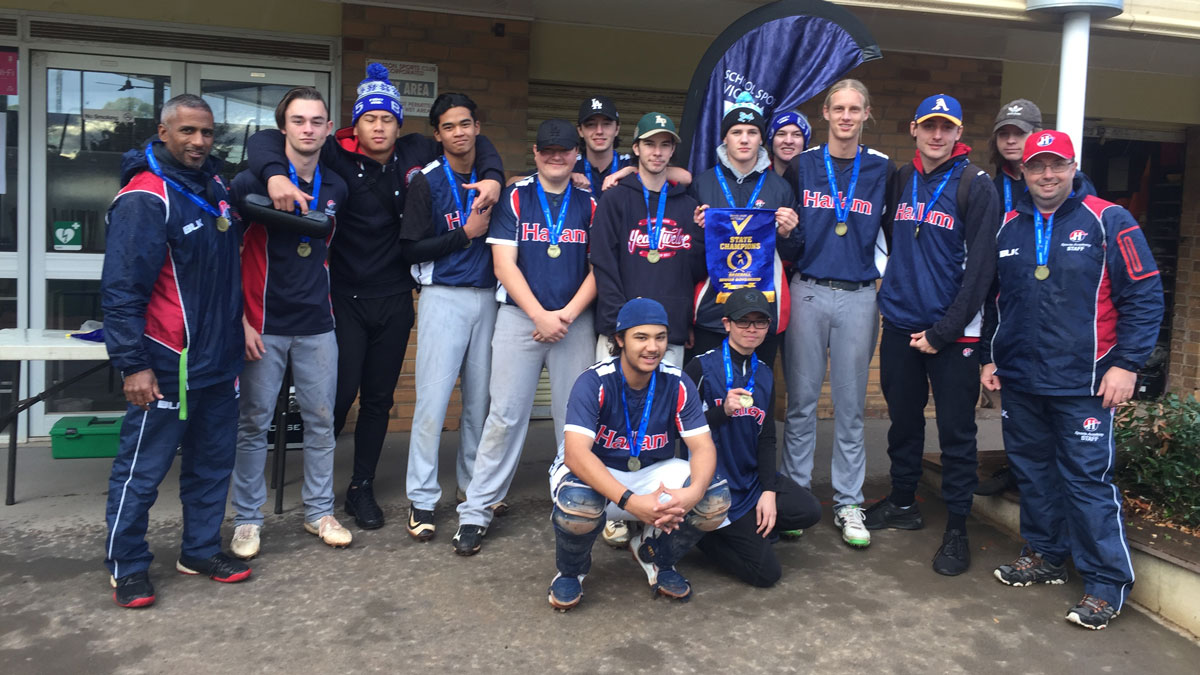 Congratulations to our Senior Boys Baseball team who earlier this week won the SSV State Title.

The 2019 State finals were played on Tuesday at the Cheltenham Baseball Club. It was a cold and windy day but the players handled the conditions well and played outstanding baseball in the three pool games to qualify for a spot in the final to defend the title we won in 2018.

Our first game for the day was against Broadford SC. Mitch set the tone for the day hitting a lead off double and a few batters later Mohi hit one into the car park for a Grand Slam.

We scored the 5 run maximum in each of the three innings to run out comfortable 15-0 winners.

Game 2 was against Chario Christian School. They managed to load the bases in the first inning but Dylan was able to strike out the next two batters to keep them off the scoreboard. We scored 3 in the first (Donnie 2 run home run). Dylan then pitched well to retire the next 6 hitters in order while we went onto score another 6 runs for the game. Had they been able to covert on the first inning the result could have been very different to the final 9-0 scoreline.

Ringwood SC were our opponents for the third game and we got off to a great start with 5 runs in the first inning. Ringwood were swinging the bats well and were able to score their first two runs from home runs. At the end of the second inning the score was 5-2. We tried a few different pitchers in the third (some pitching for the first time) and Ringwood took advantage to score another two runs to make in a one run game.  We hit well in our half of the inning however to score the maximum 5 runs to finish 10-4 winners.

Our 3 wins saw us qualify for the final against Oberon HS who had won all three games in their pool.

Mitch lead off for us with a walk and scored on Andrei’s 2 run home run. Our starting pitcher Donnie was able to keep them off the scoreboard to see us lead 2-0.

We were able to score another 4 runs through some great base running and an unfortunate arm injury to their pitcher (Best wishes for a speedy recovery). Donnie got 3 quick outs in the second inning for us take a 6-0 lead.

Oberon were not done though and kept us from scoring in the third inning. Their leadoff batter then hit a home run which kept the game alive.

Riki was able to score with two out to start the fourth. Mitch took over from Donnie on the mound to pitch what would hopefully be the last inning. Oberon keep fighting and were able to score one more run but Mitch was pitching well and was able to close out the game with the final score 7-2.

A special thank you to former head of Sport, Lyn Clarkson who unfortunately could not be there on the day and to Mark Gelderbloem for stepping in, driving the bus and agreeing to stop at Maccas on the way back to school.

Congratulations to Mitch, Donnie, Andrei, Mohi, Dylan V, Matt, Hayden, Liam, Riki, Jai, James, Dylan R and Bailey for a great year. The boys went through the early rounds and finals with out losing a game and really deserved the opportunity to defend the title we won in 2018.